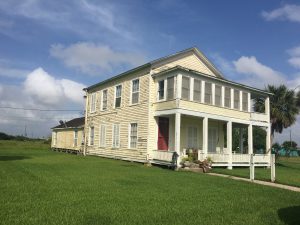 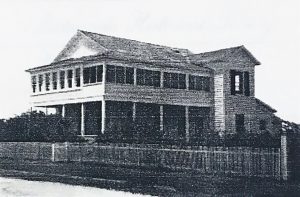 Older image of the Dale-Rugeley-Sisk Home as the Matagorda Historical Society petitioned to buy the property and maintain its furnishings as representative of the county’s rich history. Image taken by research team at the Matagorda County Archive, May 2016.

Driving through downtown Matagorda and Bay City today, one of the most striking features of the area is the interplay between old and new buildings. In both instances, the notion of a city center, defined by a main drag in the former and a more European-esque square in the latter, anchors daily life for many locals. Indeed, this area maintains some of the oldest buildings in the state. Although many edifices have undergone various phases of renovation and have occupied myriad positions in city government, private industry, and small business, the history of buildings and property in the area provides a rich glimpse into slavery’s past.

The infrastructure in Matagorda County was heavily influenced by the agricultural commodities grown in the region. Robert Williams, one of the original Old Three Hundred colonists to settle in the Matagorda area, reflected later in life that three cotton gins were built on and around Caney Creek between 1826 and 1827. Thus began the intricately connected relationship between the rise of industry in Matagorda and agricultural prosperity. Others, including William Rabb and Thomas McCoy, erected gristmills and additional processing equipment on their plantations as farming became increasingly profitable. Aylett C. Buckner, a contemporary of these men, operated a trading post in the county, likely serving as a mediator between the new inhabitants and traders in inland Texas and other port cities. One of Buckner’s comrades in the Battle of Velasco (1832), Isaac Van Dorn, was elected the first sheriff of Matagorda County in 1837. 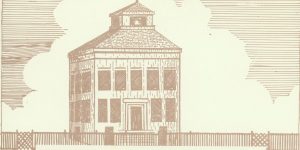 Around 1848-1849, the first Matagorda County Courthouse was built, a two-story wooden building that was leveled just five years later after a destructive hurricane ripped through the Texas coast.Roughly fifty years later, upon local agreement to move the county seat inland to Bay City, construction on the second county courthouse began. Located in the town square, the courthouse has been remodeled a number of times, reflecting contemporary architecture and growing local needs with every new iteration. 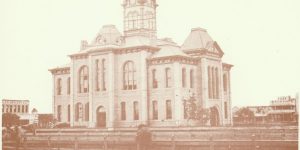 Photo of the 1896 Matagorda County Courthouse.

Along with the growth of county government buildings, nineteenth century Matagorda residents were supportive of establishing churches and schools. As mentioned elsewhere, many churches were founded in the area between the 1830s and 1850s, reflecting numerous denominations and an intensely religious environment. After the Civil War, just three years after the recently freed African American community built Mt. Pilgrim Missionary Baptist Church, the white community constructed the Matagorda Public School in 1888. Positioned on the corner of Cedar and Lewis streets, the establishment housed all grades into the twentieth century, when eventually younger students were moved to a different location. In 1905, a school on the outsides of Bay City proper was converted into a place where black children could receive an education, known as the Booker T. Washington School. White children moved to a different facility.

From the beginning, commercial interests in Matagorda were intricately connected to the agricultural commodities produced in the region. In the late 1820s, the first cotton gins in the county were built, solidifying the importance of the natural fiber to the community’s economic growth. Indeed, cotton and sugar quickly became the defining crops in southeast Texas, linking the area to the rest of the Deep South and America’s booming plantation system. The Hawkinsville mill, for example, erected by enslaved laborers using the kiln-dried brick made on site, was one of the largest sugar producers in Texas during the 1800s. When slavery and convict labor became either outright illegal or damning unprofitable, the Hawkins brothers turned to cattle ranching, as did many of their contemporaries. Others, at the turn of the twentieth century, diversified their crop production and focused on varied subsistence farming, growing, to varying degrees of success, figs, grapes, peaches, and corn.

Religion in Matagorda County developed hand-in-hand with the arrival of white farmers and their enslaved property. People of African descent likely practiced Christian and non-Christian forms of fellowship throughout the early nineteenth century, but it was not until 1854 that the first religious institution, a “colored Baptist church,” petitioned for membership and recognition in the county. After the Civil War, freedmen and women established independent black congregations, no longer forced to attend their enslavers’ churches or worship with extreme discretion on individual plantations. From 1866 through the early twentieth century, a total of twelve African American churches were established along Caney Creek. Shiloh Missionary Baptist Church (Cedar Lane), Vine Grove Christian Church (Liveoak), and First Berean Missionary Baptist Church (Buckner Prairie) were all established within two years of Emancipation, though physical buildings were not instantly erected in all cases. Still, the religious conviction of Caney Creek’s African American population cannot be overlooked – well into the twenty-first century ten of the original twelve churches were still vital parts of the local community.

“Steal Away to Jesus”
(from The Book of American Negro Spirituals)

My Lord, He calls me
He calls me by the thunder
The trumpet sounds within-a my soul
I ain’t got long to stay here