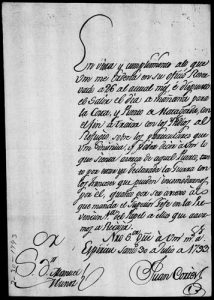 A letter dated July 30th, 1793 from Juan de Cortés to Manuel Muñoz, expressing a trip to the port of Matagorda to talk to and negotiate with the Native Americans, as well as examine the coast for evidence of French warfare/invasion. By Juan (de) Cortés, Bexar Archives, e_bx_010352_001, The Dolph Briscoe Center for American History, The University of Texas at Austin. Used with permission.

Matagorda, which refers to both a county and its largest city, is located in southeast Texas between the Gulf of Mexico and the eastern side of the Colorado River. The city is the second oldest port and third oldest city in the state. Originally inhabited by the Karankawa people, between the sixteenth and nineteenth centuries the Matagorda region saw colonial settlements from Spain, France, and Mexico. In the 1820s Stephen F. Austin and members of the Old Three Hundred began to colonize the region in the southeastern segment of the Austin Colony. Often referred to as “Old Caney,” Matagorda County’s livelihood relied heavily on Caney Creek–located in the eastern portion of the region bordering Brazoria County. The creek was home to the majority of Matagorda plantations and farms, and was used for industry and transportation. Today, the waterways of the Matagorda-Bay City area still heavily influence daily life as ranching, farming, and industry make constant use of the environment.

During the 1820s approximately 52 families from of the Old Three Hundred settled the region, including individuals such as Elias D. Wightman, William Selkirk, and William Rabb. The latter likely agreed to settle the area and build a sizable gristmill nearby if granted a large piece of property. Such negotiations dot the area’s history, indicative of the widespread knowledge of the agricultural viability of Matagorda’s rich soil. Not surprisingly, then, as Matagorda grew, it became a destination for planters throughout the South interested in the abundant land and the promise of fortune. 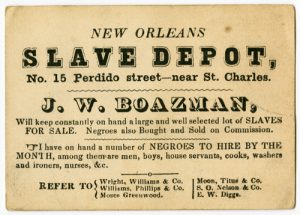 Prior to independence from Mexico and gaining statehood, changing legislation in Texas regarding slavery made its legal status uncertain during the county’s early history. Even so, planters and immigrants continued to settle the area, bringing enslaved people with them and advocating for the lawful continuation of the institution.

As a result of such migrations, during much of the nineteenth century Matagorda County served as a focal point for the domestic slave trade in Texas. Between 1850 and 1860, Matagorda County’s enslaved population saw an increase of over 200%. By 1860, there were over 1,500 enslaved laborers in the county with a general population of nearly 3,500 people. Such human property in Matagorda was traded throughout the region, crossing city, county, and even state and national lines. As a port city, Matagorda received shipments of enslaved people coming from Galveston, New Orleans, the mid-Atlantic coast of the United States. Quite likely is also the possibility that ships carrying supplies and enslaved bodies from the Caribbean made their way to Matagorda Bay. Thus, southeast Texas, though geographically distant from many major nineteenth-century American cities, was intimately connected to the economic mandates of the global slave trade. 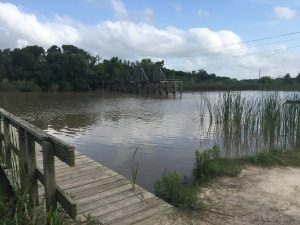 View from the west bank of Caney Creek, facing downstream.  This perspective emphasizes both the levelness of the banks in relation to the water and the thick trees and vegetation that could make navigating the area on foot a challenge. Both of these properties could be incredibly useful for enslaved individuals seeking an upper hand on their enslavers, intent on briefly absconding, running away permanently, or even committing suicide through drowning. Photo taken in May 2016.

Low sea level and abundant waterways including Caney Creek and the Colorado, Tres Palacios, Brazos, Sabine, and Trinity rivers helped to make the land of Matagorda County fertile for a number of crops. The soil was suitable for planting cotton, rice, sorghum, and sugar cane, while fishing, farming, and cattle ranching were all made possible due to the broad terrain and plentiful waterways. Enslaved African Americans were responsible for tending to these crops and working the land, bringing significant wealth to their white enslavers and making Matagorda County one of the wealthiest areas along the coast. The area’s dependency on a multi-crop agricultural economy was both advantageous and dangerous: ample crop production concretized Matagorda’s role in the domestic slave trade and placed the area in national conversation with other slave trading ports, yet a drought-laden season or flood-filled one could have catastrophic effects on the livelihood of the entire county for years to come. Indeed, when the coast was slammed with a horrific hurricane in 1854, many buildings in Matagorda City were entirely leveled. That citizens managed to rebuild as opposed to abandon their property attests to what many saw as the economic vitality of the strategic area.

Not unlike the rest of the Deep South during the nineteenth century, Texas, and Matagorda County specifically, were deeply religious. The first Episcopal church in the state of Texas was organized in Matagorda in 1838. Just a year later, Reverend Jesse Hord organized the Matagorda United Methodist Church. Like the first county courthouse, the church was destroyed in the 1854 hurricane. Baptist and Presbyterian churches would be located in the county before the end of the century, testifying to the diversity of religious practices in Matagorda. Due to overlaps in different Christian faiths, the local waterways, including Caney Creek, were instrumental for religious instruction and ceremonies.