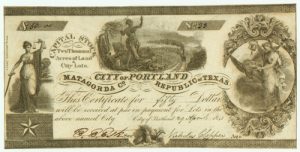 $50 certificate for the purchase of capital stock for 2,000 acres of land in 1841. The land was located in Portland, Texas, near Matagorda. J. Lowe, Broadside Collection, BC_0129, The Dolph Briscoe Center for American History, The University of Texas at Austin. Used with permission.

In 1827, Stephen F. Austin petitioned Mexican authorities to establish the city of Matagorda to accommodate the flood of immigrants coming to the region. The majority of early settlers of the town came from the East Coast of the United States. Officially incorporated in 1830, Matagorda became an economic powerhouse in Texas during the antebellum era, partly due to its strategic location as the nearest seaport to New Orleans. After the Texas Revolution, Matagorda became the seat of government for the county, and many wealthy enslavers would spend their summers in the city to escape the unpleasant, humid, and unhealthy environment of their plantations along waterways such as the Colorado River and Caney Creek. During the Civil War, Matagorda served as a major provider of weapons, food, and clothing to the Confederacy. In 1894, citizens voted to move the county seat inland to Bay City.

William Gray Warren: William Gray Warren (1806-1868) was a wealthy planter who owned a plantation on Caney Creek. Warren’s family moved from their native North Carolina to Texas, like many enslavers who migrated from the Upper South to Texas during the antebellum era. On June 1, 1854, in Matagorda County, he married Maria Louise Swisher Graham. Maria’s family arrived in Texas by waterways: they boarded a flat boat in Franklin, Tennessee to New Orleans, then traveled from there by schooner to Matagorda. 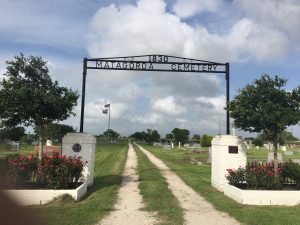 Enslaved people were not buried in the Matagorda Cemetery, located almost in the center of town. Photo taken in May 2016. 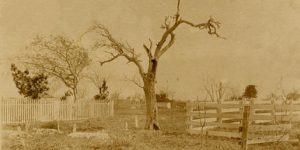 According to the 1860 census, Warren possessed considerable wealth: 112 slaves, real property worth $85,000, and personal property of $76, 000. His will states that at the time of his death, he owned 3,394 acres of nutrient-rich land. Visitors who travel to the site of the former plantation today can see the trail where the enslaved once walked and the cemetery where many bondspeople are buried. The proximity between Warren’s “Caney Plantation” and those of other local planters is evidenced in the path alongside the creek that allowed freedmen and women to worship at Mt. Pilgrim Baptist Church in the late nineteenth century.

Albert Clinton Horton: Albert Clinton Horton (1798-1865) served as the first lieutenant governor of Texas. He lived in Alabama before moving to Texas in 1835. Horton owned a large plantation in Matagorda County, and on the eve of the Civil War, he was one of the richest men in Texas, possessing 150 slaves. However, the war bankrupted him. In Horton’s last will and testament, the claims made against his estate were listed. There were 68 claims, the majority occurring during the Civil War. The appraiser of the estate, Whittier and Franks, stated in the will that the total worth of Horton’s property stood at $99,087 and that Horton owned 600 acres in Matagorda, worth only $240.00.

In the nineteenth century Matagorda developed into a thriving city. A cotton gin was built in the city in the 1820s, a customhouse in 1831, and a chamber of commerce in 1840. As the second largest port in the state (after Galveston), Matagorda was also dependent on the shipping industry. Enslaved labor played a major role in Matagorda’s economic growth in the era before the Civil War. Between 1850 and 1860, for example, James B. Hawkins’ enslaved population almost doubled, yet the value of his estate increased more than 600%. John Rugeley, the family patriarch, experienced a similar level of unimaginable growth during the decade before the war: although his enslaved workforce decreased from 67 to 62 individuals, his assets increased a staggering nearly 800%. Clearly, then, the mid-nineteenth century was an era of unprecedented economic growth in southeast Texas, thanks almost entirely to the profits gained through enslaved labor. 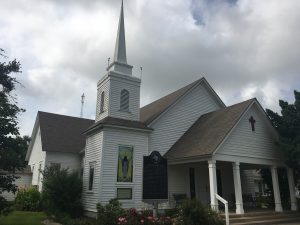 Matagorda Methodist Church is one of the oldest such institutions in the state. Currently located in downtown Matagorda, the constant rebuilding, expansion, and support of the church all highlight the importance of religion to the area’s city dwellers and more rural farmers/planters alike. Photo taken in May, 2016. 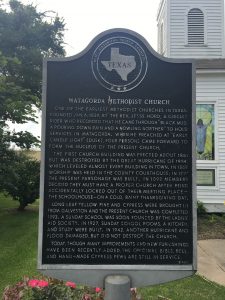 A close-up of the church’s historical marker. Photo taken in May 2016.

The Presbyterian, Methodist, Baptist, and Episcopalian religions established an organized presence during the early years of the town, although not all met in official buildings initially. The oldest Episcopal church in Texas, Christ Church, is located in Matagorda. Several enslaved people on the Warren Plantation were baptized at this church in 1862 during the Civil War. The Warrens were reportedly known for their relatively ‘humane’ treatment of their human property.

Albert C. Horton, mentioned earlier, was a devout Baptist, and built a separate church where his enslaved laborers worshiped. He even hired a preacher, Noah Hill, as the pastor of the congregation. Bondspeople were active participants in church and religious services in the local area. In 1848, enslaved members of the Matagorda Church sent $11.50 to the Texas State Baptist Convention to support missionary work in Africa. In 1854, a “colored Baptist church,” made up of the enslaved people who lived on the plantation of J.H. Jones of Matagorda County, requested and were allowed to join the Colorado Association, a religious body which included all the Baptist churches located east of the Colorado River.